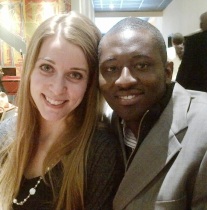 A Port-au-Prince, Haitian native, Garry Guillaume grew up with a passion for learning and expression through music. He often visited his mother’s family in Jean Rabel as a child, even attending a few years of school in the community. Garry served as French instructor to many high school students in Haiti, maestro of the Spirit of Light Gospel Choir in Callebasse, and leader of the band Voice’s Praise. Garry also worked as a translator for various mission groups before moving to the U.S. in 2012 to be with his wife, Rio.

Garry released his album Just Believe in 2013 not only to encourage and inspire his listeners, but to use the profit to give the people of Jean Rabel a chance for a brighter future.

From the city of Chicago, Rio T. Guillaume is an American Ballet Theatreâ certified associate instructor in New York City. Haiti has held a prominent place in her heart since her first mission trip in 2008. She has since completed numerous trips to Haiti and worked on various projects including co-directing the first annual Camp D’ete Summer Camp for children at an orphanage in the rural own of Thomazeau. In the summer of 2011, Rio founded a summer dance therapy program with Restavek Freedom Foundation and continues to follow God’s call on her life to help restore the Pearl of the Caribbean.

The Guillaumes value collaboration with the community of Jean Rabel in transforming their hopes into a reality. With God as their leader, they strive to grow and share their love for Haiti’s countryside with others for generations to come.